The diagnostic feature of immunoglobulin A (IgA) nephropathy (IgAN) is the substantial accumulation of IgA in the filtering structures (glomeruli) of the kidneys. When IgAN was first described in 1968, most patients also had another antibody, IgG, in the glomeruli. The diagnosis of IgAN does not however require IgG to be detected by routine pathology studies.

Researchdone 20 years agoin Japan and Englandshowed that the IgA that accumulates in the kidneys had a unique composition: it lacked the normal amount of a specific type of sugar, galactose.This IgA is called galactose-deficient IgA(sometimes abbreviated as Gd-IgA).In the last 10 years, research done at UAB in collaboration with colleagues from around the world and supported by the IGAN Foundation of Americaand NIH has led to significant advances in our understanding of the disease. The generosity of many patients with IgA to provide blood and urine samples made these research studies possible.

The IgA-IgG complexes in the glomeruli frequently cause structural damage that leads to leaking of red cells and protein from the blood into the urine. Persistent injury often results in scarring that reduces the filtering function of the kidneys, a condition known as chronic kidney disease. The IgA Nephropathy Research team at UAB has proposed a 4-step process as the basis for development ofIgAN. 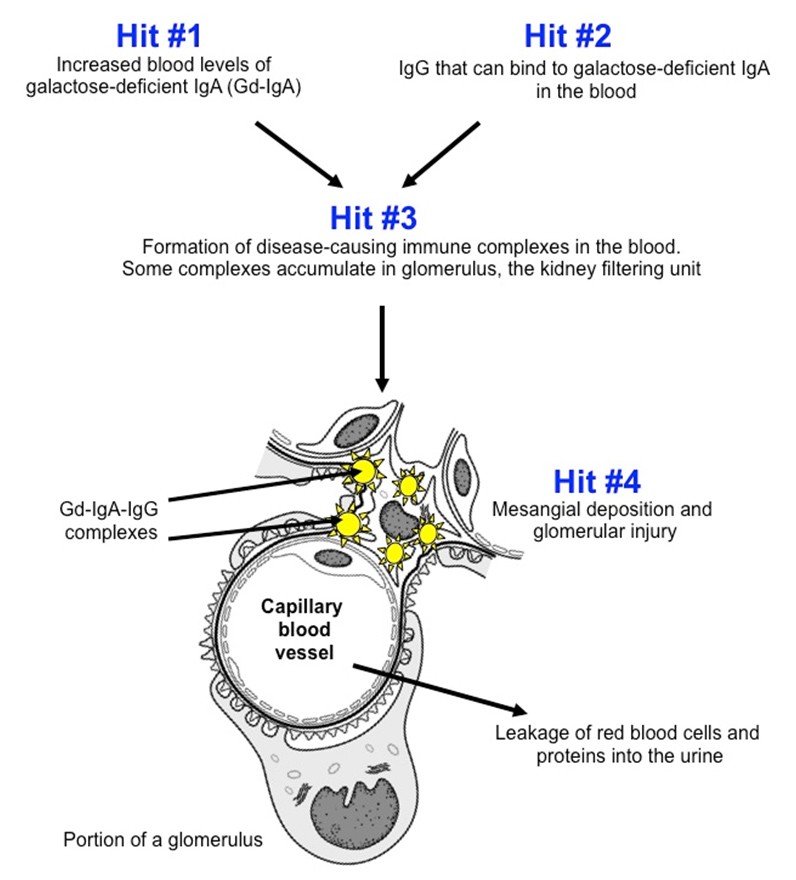 IgG autoantibody is present in all IgAN kidney biopsies

IgG is not detected in the glomeruli in the kidney biopsy of some patients with IgAN by standard processing. This finding led some scientists to question the relevance of the 4-step process. Using recently developed laboratory tests, the UAB IgA Nephropathy Research team has shown that IgG could be detected in kidney biopsies of all patients with IgANeven when it was not seen by routine methods. Furthermore, IgG extracted from these kidney-biopsy specimens binds to galactose-deficient IgA. Using a newly available procedure with confocal microscopy, we confirmed that the IgA and IgG in the glomeruli were in overlapping positions, consistent with the two antibodies being bound together in a complex. These findings support the 4-step disease mechanism for IgANand highlight the pivotal role of IgG autoantibodies in causing the disease.

The UAB IgA Nephropathy Research team partnered with investigators in China and France to discover that elevated blood levels of 1) galactose-deficient IgA and2) the corresponding IgG autoantibodiesare each higher in patients who develop chronic kidney disease 10-12 years after the diagnostic biopsy than in patients who maintained good kidney clearance function.These findings were based on work using a large group of patients. Further work is underway to refine these tests so they can be more helpful for providing prognostic information to individual patients.

About 5-8% of patients with IgAN have a family member with IgAN shown by biopsy, or laboratory tests suggestive of the disease (blood and/or protein inurine). Currently, there is no genetic test that can be used to reliably predict the future development of IgAN.

Studies done with investigators at Columbia University in New York have shown that the influence of several genetically determined factors increase the risk for IgAN. These studies found that variations in at least 15 areas inthe human genetic code influence the likelihood of development of IgAN. Further work has shown that some of these genetic influences affect the production of galactose-deficient IgA that can lead to higher blood levels of this immunoglobulin. Ongoing studies are trying to define the additional specific effects of these 15 genetic variations so that treatment for patients with IgAN will be focused on the root causes of the kidney injury.

Dr. Colin Reily in the Division of Nephrology at UABhas developed a better laboratory test to measure galactose-deficient IgA. This new method is an advancement that will be critical for further investigation of mechanisms involved in production of this IgA that plays a central role in the disease processes of IgAN.

Currently there is no disease-specific treatment of IgAN. The standard approach is to use drugs known as angiotensin converting enzyme (ACE) inhibitors or angiotensin receptor blockers (ARBs) that can reduce the amount of protein in the urine as well as treat high blood pressure. Other measures for some patients have included fish oil supplements to reduce protein in the urine, and control of hypercholesterolemia, acidosis (too much acid in the blood based on a standard blood test), and avoidance of nicotine-containing products. With the better insight into the cause of IgAN, several pharmaceutical companies are now developing new approaches for disease-targeted treatment. Clinical trials are underway at UAB and at other medical center to evaluate new, potentially useful, medications for the treatment of IgAN.

Selected publications by the IgA Nephropathy Research Team at UAB