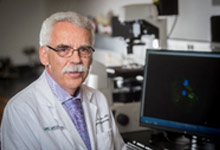 Dr. Bruce A. Julian is Professor Emeritus in the Division of Nephrology, Department of Medicine, at the University of Alabama at Birmingham (UAB). His research interest in IgA nephropathy (IgAN) started in 1979 during his nephrology training at the University of Kentucky with collaborative studies with Dr. Robert J. Wyatt on the role of complement proteins in the disease. In 1980 he entered private practice in Lexington and in 1982 discovered a family with multiple members with biopsy-proven IgAN, indicating that genetic factors are important for development of the disease. He joined the faculty at UAB in 1984 to pursue investigations for the cause and clinical expression of IgAN. During his 36 years at UAB, he has collaborated with many scientists at UAB, University of Tennessee, Memphis, and Columbia University in the US and in the Czech Republic, France, England, Italy, The Netherlands, China, and Japan. The research sought to define the genetic influences in the disease and the unique structural characteristics of the IgA protein in the blood and kidneys of patients with IgAN. Based on the results of these studies, the UAB IgA Nephropathy Research team in 2011 proposed a multi- step process for the development of IgAN that has become the blueprint for testing new approaches for the treatment of the disease.

In 1987 Dr. Julian was a founding member of the IgA Nephropathy Club that later expanded to become the International IgA Nephropathy Network to organize multiple international symposia for researchers to discuss their recent studies and exchange ideas. He was a member of the international group of nephrologists and pathologists that developed the Oxford Classification of the pathology features of IgAN. In 2013 Dr. Julian received the UAB Max Cooper Award for Excellence in Research. In 2015 he co-founded Reliant Glycosciences, LLC, a biotechnology company focused on the development of biomarker assays for IgAN. Dr. Julian has published 145 papers and 18 book chapters on IgAN.

History of discovery, research and treatment of IgA Nephropathy