IgA nephropathy (IgAN) is an important cause of ESKD for which there are no approved therapies. A challenge for evaluating treatments for IgAN is the usual long time course for progression to ESKD. The aim of this Kidney Health Initiative projectwas toidentify surrogate end points that could serve as reliable predictors of a treatment’s effect on long-term kidney outcomesin IgAN and be used as a basis for approval. Proteinuria wasidentified as themost widely recognized and well studied risk factor for progression to ESKD in IgAN. The workgroup performed a critical review of the data on proteinuria reduction as a surrogate end point for a treatment’s effect on progression to ESKD in IgAN. Epidemiologic data indicate a strong and consistent relationship between the level and duration of proteinuria and loss of kidney function. Trial-level analyses of data from 13 controlled trials also show an association between treatment effects on percentreduction of proteinuria and treatment effects on a composite of time to doubling of serum creatinine, ESKD, or death.We conclude that data support the use of proteinuria reduction as a reasonably likely surrogate end point for a treatment’s effect on progression to ESKDin IgAN. In theUnited States, reasonably likely surrogate end points can be used as a basis for accelerated approval of therapies intended to treat serious or life-threatening conditions, such as IgAN. The clinical benefit of products approved under this program would need to be verified in a postmarketing confirmatory trial. 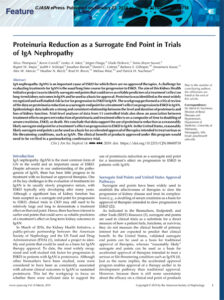